What can you fit into an ATtiny10 1kB flash memory? Certainly a lot, and it appears it’s enough for a videogame too! This is a game of 700 bytes that works with just three components: the ATtiny10, an OLED display and a button.

Some time ago I started playing with the AVR ATtiny10. It’s a tiny microcontroller with just 1kb of flash memory and 4 I/O in a SOT-23 package1. At first, you may wonder what is the use of such a limited microcontroller. Still, 1,000 bytes are sufficient for many small applications, especially with some creativity and a thoughtful use of the code. I wanted to bring this to the other extreme and build something notoriously complex and demanding in terms of program space.
So, what better than a videogame? To build a proper videogame, you need to take care of the game mechanics, input and output peripherals, graphics and so on! 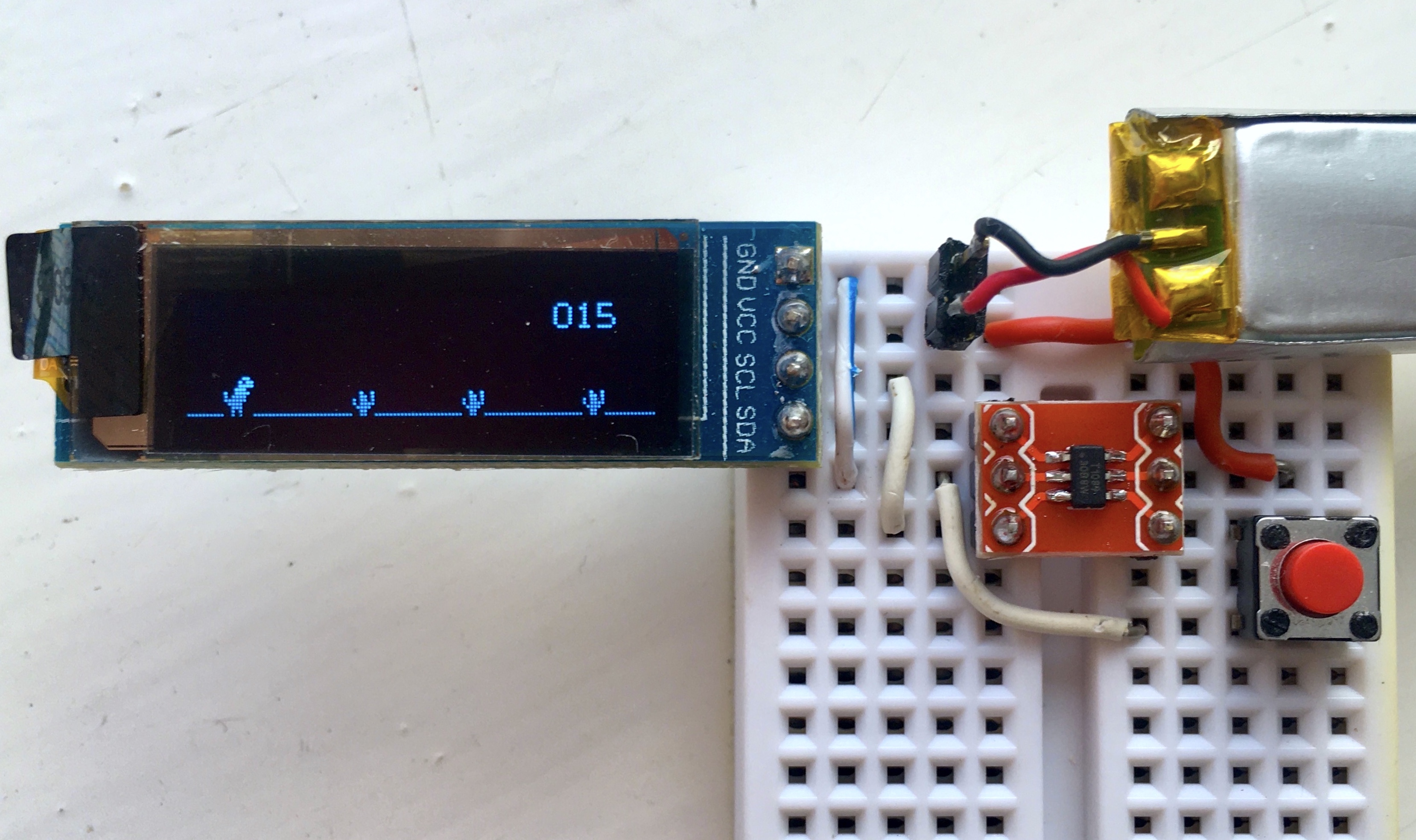 This game is an endless runner where the player has to jump the obstacles using a button. When he hits the obstacle the game ends and the microcontroller goes to sleep. A new button press wakes up the console and restart the game.

The game uses a 128x32 OLED display breakout board connected by bit-banged TWI through PB0 and PB1 that act as SDA and SCL. The input is provided by a pushbutton connected to PB2 used also to wake up the microcontroller from the deep sleep mode. 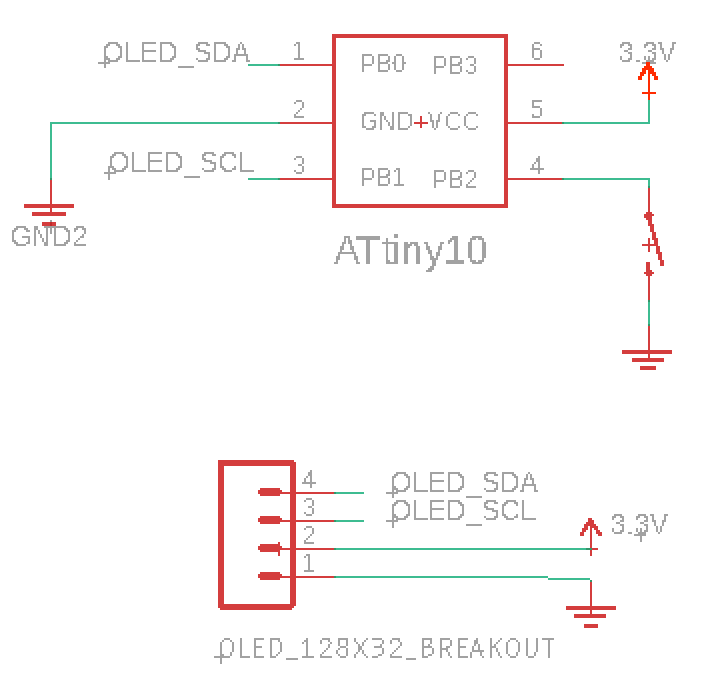 The full code and firmware can be downloaded from the github page. The code can be built and uploaded using PlatformIO and this guide. Alternatively, you can just download the firmware.hex file and load it into the ATtiny10 using avrdude and USBASP:

Use the appropriate path to the avrdude configuration file. Also consider that the USBASP has to have the latest firmware to support the TPI interface. You can refer to this page to update it.

I started writing the game in C but I soon realized I needed full control of the registers and instructions to keep the code small. So the intention was to write the key functions in assembly but I ended up writing the entire game with it.

Given the space constraints, some problems required some out-of-the-box thinking. I share below the details of some key parts of the code with the hope it may inspire you to make something better.

If you don’t know assembly you can learn the basics in a few hours 2 and is something I strongly recommend. It can really boost your understanding of C and the CPU in general. In some cases, I include what the C version of the code would look like to ease the understanding.

The player is represented by a sprite 8 pixels wide and 11 pixels tall. 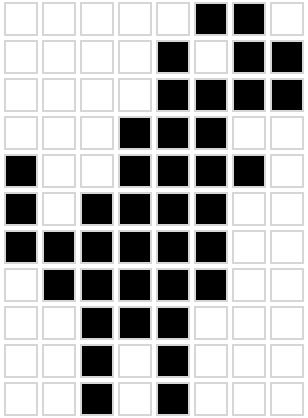 And this is the sprite bitmap:

To draw the player one must consider that it only moves up and down. Hence only occupies a portion of the screen that is as wide as the sprite (8 pixels) and extends vertically across the whole screen (32 pixels). The data is sent to the display one column at a time and each column is made by 32 bits. I first load the sprite into the lower half of a 32 bit variable split in 4 registers (8 bits each):

This is similar as doing var >>= _h in C with var being an uint32_t. Then I write these bytes to the display RAM and repeat for each one of the 8 columns the sprite is made of. 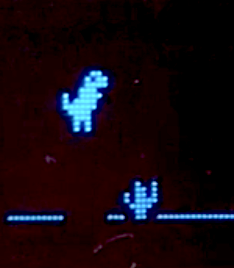 The game only requires one input to make the player jump. The input comes from a push-button connected to PB2 of the ATtiny10.

The button press is recognized by an external interrupt service routine that comes handy also to wake up the device from deep sleep.

Two variables are used to manage the jump: one is the player vertical position and the other defines the movement direction. Let’s call it vertical speed. The speed can be either a positive or negative constant or zero. When the button is pushed the speed is set to +JUMP_SPEED (that is an arbitrary number of pixels).

In each frame, the player y position is increased by the vertical speed and the player goes up.

When the maximum height is reached the vertical speed is changed to negative and the player starts going down. When he touches the ground the speed is set to zero.

There can be at most three obstacles in the screen. Their positions are stored in three variables in the RAM In each frame, the position of the obstacles is updated decreasing it by a certain number of pixels. If the obstacle #1 is passed, its position will eventually become negative. At that point, the obstacles positions #2 and #3 are moved into #1 and #2. The position #3 is loaded with 0 meaning there are only two obstacles on screen now.

If there are less then three enemies on screen a new one needs to be generated. I do this with a sort of Xorshift random number generator. I also xor the current state of the RNG with the player height that can be considered a source of randomness. If the pseudo-random number generated is above a certain threshold a new obstacle is generated at the end of the screen (position 120)

Printing the obstacles is done updating the last page of the display. I loop over the entire screen width from the column 0 and compare the current column with the position of the obstacles.

If these are equal print the display, otherwise the column is empty.

In C this code would be something similar to this (not tested):

To have a score you need to store the number itself and translate it in something that can be printed on screen. At first, my thought was to keep the score in a variable. This poses two issues.

First, to have a score higher than 255 you need to use more than an 8-bit variable. With an 8-bit CPU, this means more instructions and in turn more memory occupied.

Second, how do you get each single digit from a binary number? Let’s imagine you want to get the tens digit. One obvious way is to divide by 10 and then do modulus ten of the result: digit = (score/10)%10. The problem is that this is very demanding for a processor that can’t do divisions.

However, I noted that the score only increases starting from zero. This means that I don’t need to know the number but just sequentially print the digits. To understand better consider that the digit font is stored in an array of 5x10 bytes where 5 is the width of the font in pixels. The I use three variables each storing the position of a digit within the array. Each time the score increases the pointer of the units moves to the next digit position (i.e. from 0 to 5, for a font 5 pixels wide). When it reaches the end of the array, goes back to 0 and the variable of the tens moves by one digit. So the score is actually not stored as a number but just as a reference.

This is somewhat similar to the C code:

Game over, sleep and reset

In each cycle, I check if the first obstacle is behind the player or in front of him. In this case, the player position doesn’t matter. Instead, if the obstacle is in the space occupied by the player width, check the player vertical position. If it’s higher than the obstacle, good! Loop again. Otherwise GAME OVER.

At game over I invert the display RAM (all dark pixels are lit and vice versa) a couple of times to indicate the game is finished. After that, I switch off the display and set the microcontroller to sleep.

To wake up the system and start a new game you need to press the button; everything is reset and you can play again.

At the beginning of every loop, the program waits for a few milliseconds to set the frame rate. Let’s call it frame rate as it sounds cool but is essentially a delay between one image and another.

In the following code, the number of iterations is passed through registers R24 and R25. The loop just decrease these registers by one. Each iteration takes 4 cycles therefore 4us. A delay of 1 millisecond will be given by 250 iterations3.

This was a fun project with no real usefulness but that offered a lot of things to learn. I hope you also got something out of it and in case you have comments or questions leave them below.